Not so new now , but 6 years  later , still the arrangement stands  but still NOT for July and August.

We at Defleffs Owners are pleased to announce a new benefit . Following some enquiries at the Birmingham Show (2016) with a French company C’est si Bon, we have been offered some interesting rates.

[one_half]My contact Floris Aumes, is one of eleven family owned Campsite owners who have set up a network of 15 , campsites thorough France in rather special locations compared to some under flyovers, near junctions and busy railway sidings to mention a few specialities. Floris owns the site in the Dordogne Chateau Le Verdoyer. 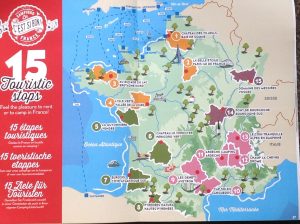 The main attraction is that the standard fee of €24 a night for a van, two occupants and electric will only be €18 for UK Club members.  But not during July & August at present. Also a 3 nights for 2 @ €36 offer.

[/one_half][one_half_last[/one_half_last]Please just look at http://www.c-sibon.fr or put C’est si Bon camping into Google. I have no idea why all the sites are numbered 2 or 3, but clicking on them shows more detail.

They may even be suitable en route to Spain and or Italy .

This “Deffy campsite rate” is available now and obtainable for ALL of their sites, via producing the print your own Voucher from the Members area of the D.O.C. web site.  They will arrange tours for us, if we have a Rally ,but have to have a min of 12 vans and a max of 20.

For those tempted to go abroad for the first time ( says the old sage who has only been on 4 trips to Europe) the first stop near Paris, La Belle Etoile and their new site Saint Di des Voges near Strasbourg could be an alternative route, particularly as this site is only four hours from Isny and the Lake Constance route to Isny.  This group of Campsites are all family run and their own group .  The are open from April to Mid October so plenty of scope as you will see from their page .

The coupon that is available in the Members Area for you to print off to present to the site office for the Deffy Discount.

So if nothing else something to think about as 2019 is here we are planning a trip to the Pyrenees .

There is more information on their web site . There are some variations,  put ‘C’est si Bon campsite’ into google gives you the translation options as well. You can also download their brochure for 2019 and a very clear map !